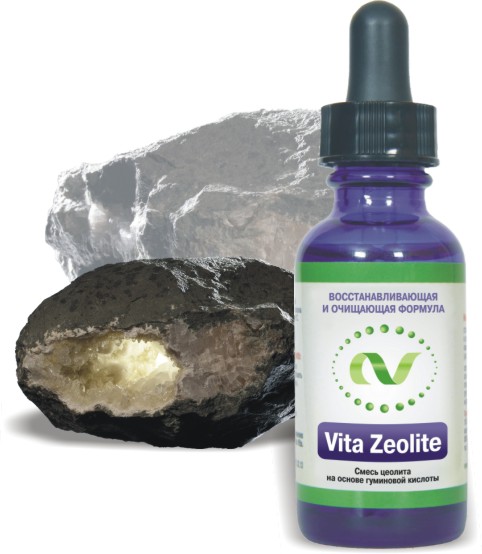 «Vita Zeolite» at its base, is a combination of zeolite, humic substances and their constituent minerals in the amorphous monoatomic state, as well as gold and platinum group metals in the state ORME (monatomic elements with rearranged orbitals).

Zeolites is a group of minerals of volcanic origin, which has a honeycomb structure with molecular-sized pores and a negative charge, allowing them to soak up like a sponge and securely hold a variety of pollution. In the structure, they mainly contain silicon and aluminum compounds. Our product uses zeolite clinoptilolite. Clinoptilolite are particularly valuable variety of zeolites.

Clinoptilolite has strictly calibrated pore size (about 4 angstroms). It follows that it is capable of exhibiting only sorption properties in relation to the macro and micronutrient ions and compounds with small dimensions, without entering into a direct interaction with vitamins, amino acids, proteins and other complex organic compounds. Thus, unlike many conventional sorbent it doesn’t absorb (doesn’t excrete) nutrients (vitamins, amino acids, polyunsaturated fatty acids) from organism. Clinoptilolite simply cannot absorb them due to the small size of its pores. At the same time it effectively cleanses body of all harmful substances and heavy metal salts, which leave organism within 8 hours without a trace.

Humic and fulvic acids were part of the Earth plants millions of years ago.

Fulvic acids are natural compounds formed in the process of splitting of humic substances by soil microorganisms with exceptional properties. According to scientist’s fulvic acids are the source of life on Earth, the key to health, without them there can be no one living organism on our planet.

What caused such opinion? The fact that fulvic acids are playing key biological role, transferring all the necessary trace elements and nutrients from the soil to the plants. Their unique ability to interact with minerals leads to the formation of complexes with a truly healing properties. In result of attachment minerals are dissolving and becoming digestible to living organisms.

Furthermore, fulvic acids simplify and minerals water solubility and low molecular weight allows them to freely penetrate the cell membrane. Thus, they contribute to the absorption of nutritive substances and trace elements, easily getting inside of each cell of our multicellular organism.

They include about 74 organic minerals, 18 amino acids and 10 vitamins. All minerals are the smallest ions, which allow them easily assimilated.

Gold and metals of the platinum group are in the ORME state (monatomic elements with rearranged orbitals), playing a special role in the composition and of «Vita» series products. It is thanks to them we have made the next step and develop an entirely new direction in the industry Wellness - NEURONS COMMUNICATION!

Monoatomic gold allows person to enter into a state of harmony with the Universe and coordinate with the matrix of the Universe. Also, the gold and platinum in monoatomic state activates endocrine system: improve memory, perception and the ability to assimilate information to an incredible level, gold has an impact on the pineal gland, increasing melatonin, iridium actively influences the production of serotonin by the pituitary gland; activates, underutilized and dormant parts of the brain. Iridium is the same as rhodium extends youth, and the particles of platinum and ruthenium eliminating DNA damage.

According to study leading international biopharmaceutical company, "Bristol-Myers-Squibb," monoatomic gold and monatomic platinum group metals are correct DNA. Without entering into a chemical reaction in the cell, they are simply correct DNA. All carcinogenic damage, radiation damage, all this is corrected by these elements.

And all this is contained in a vial in liquid form! The highest bioavailability and almost instant uptake! Ease of use - 7 drops in a glass of clean water, three times per day!

«Vita Zeolite» is the only product that allows you to simultaneously solve the problems of regulation, clean and restore your body to a previously unattained level of DNA!!!

Unique multifunctional complex that starts deep processes in the body, for the health of the soul, mind and body!